Go Fish! The BC Government is waiving the requirement to have a basic freshwater licence for this weekend. So take advantage of it - GO FISH! Take the family!
Lake fishing has been fairly consistent so far in June thanks to cooler weather. Lake Trout fishing in Babine Lake and surrounding lakes has been really good (for a lot of people). Now is also a prime time to go catch some rainbow trout or cutthroats in our local lakes. Helen Lake, Denise Lake, Irrigation Lake are some great choices to go catch some fish.
Thank you to Pierce Clegg for the following info on Rainbow Alley: Water conditions are excellent in terms of clarity and temperature. The fishery will transform from the spring fry and smolt fishery to a bug fishery very soon. Use some Mayflies in size 16 when that tuns on...
Thank you to Riley and Montana for the great photo! 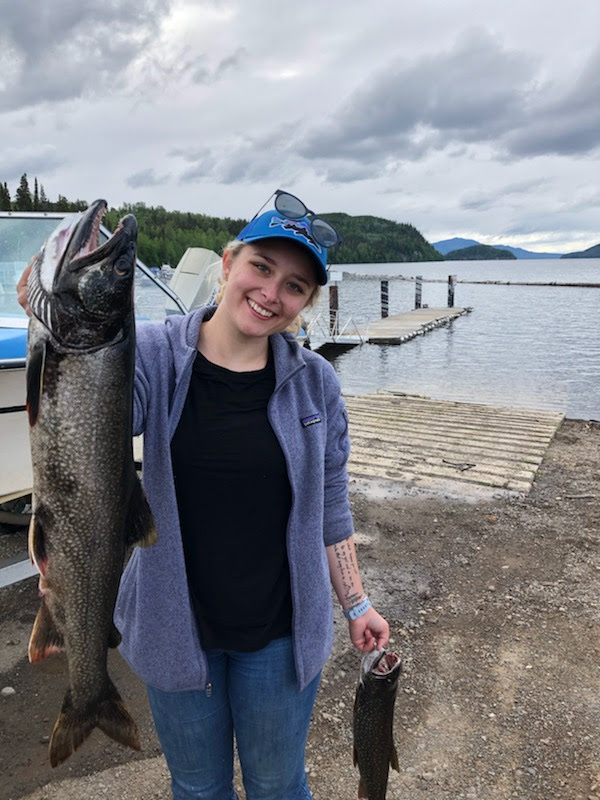 Get fishing!  If you were thinking about getting out on the water to chase some big chinook, now is the time!  We are getting great reports from Hyder Alaska, all the way down to the end of the Douglas channel.  The summer run chinook are here in full force and most anglers are doing very well. The biggest chinook we've had reported is a 49lb out of Rupert with a 46lb coming out of the Portland Canal and have seen many fish in the high 30's. Cut plug herring is working well right now and spoons are fishing great.  I had one angler report that they did extremely well trolling a Brads Cut Plug on one rod and a True Roll lure on the other. They were mostly fishing the dark blue/black lures but colors can change depending on the weather and the amount of sun penetrating the water.  The hot spot out of Rupert over the past week has been Indian Head at the mouth of the Work Channel but we've also seen great fishing around the north end of Dundas Island all the way down to Edye Pass.  There have also been a bunch of boats out at Squatarie who have been putting up good numbers of fish. Down the Douglas channel we have have seen lots of Kitimat River fish taken all the way down the channel.  Places like South Sue Channel and Money point have been consistently producing good bites, especially on the tide change. Groundfishing has been good over the past week.  We have seen calm water  which has allowed anglers to get out to the great offshore hali grounds.. Oscars has just started carrying Lighthouse Lures Megabite and Max shad jigs which are amazing for groundfish, The 6oz Max Shad jigs are great for anything down to 100ft and the Megabite work well for anything deeper.  Oscars also has a good supply of electronic lures and all of the hali/ling gear you need to get on the water.